redeem رديم
27-29 August 2021
Haus der Statistik, Berlin
> scroll down for detailed program
Someone recently noted that civil war times were better than this. That, if anything, a war was easier to grasp than what is happening today in Lebanon. That the invisible crime we now see but cannot trace or trial had already been planted some thirty years ago. Someone recently called Beirut a broken city frozen in the summer heat. With no fuel, no gas, no electricity, all food going to waste, entire families sleeping on their balconies or not sleeping at all. Someone else wondered on social media if coping may not be enough. Someone commented that the class warfare and boundless violence of dispossession must come to an end before this country can begin to heal. Someone recently asked about a friend who left her mother and sister behind to get away from it all. Someone just learned about a man who got killed in broad daylight as if it were a normal thing. Someone recently sat by a ghostly crater and could not understand what it was.
redeem رديم is a platform for ongoing conversations between voices from Beirut in Berlin and peers around the world. It acts upon a collaborative desire to amplify and deepen an already existing exchange between cultural workers who lived and worked in Lebanon before the country spiraled into its current economic and political void.

Many of these conversations have already come a long way. redeem رديم aims to build a support structure through which they can be widely heard and inspired by each other. To that end, it supplies both runway and refuge for artistic positions via workshops, podcasts and a series of events. Some of these programs will find their way into an online presence in December 2021 and a print publication in early 2022.

As a collective undertaking, redeem رديم always remains on the path to define its form and take the time to grow and understand its needs and demands. For now, it has nothing to proclaim. It only asks for your allyship with a growing community in need of safe spaces to reflect recent events and workable ideas of change.

Following a week-long workshop at Künstlerhof Frohnau in June, this community invites you now to the Haus der Statistik in Berlin with a wonderful line-up of talks, films, music, readings and live performances. The main venue is located in Haus A facing Karl-Marx-Allee, selected programs and all films screenings take place in the magic bumper car turned cinema (Autoskino) behind the building.

Made possible with the generous support of the Berlin Senate. 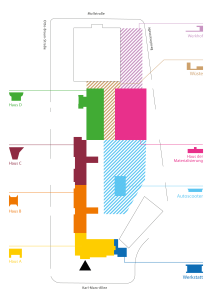